Since Wills and Kate set the date, a convivial phrase has become part of the daily lexicon: The Great British Street Party. Although I've lived in the UK for six years, until recently I'd been ignorant of this phenomenon. This may be because commoners only seem keen to gather outside their dwellings in such organised bunting-clad celebration when a Very Important Royal Event is held.

This tradition finds neighbours bonding together to enjoy a day of festivities and heaps of food in their street. It sounds like something people did in the much ballyhooed 'good ol'days' (back when a man knew his neighbours and children could play outside!) but in the year 2011 would only be written about by lifestyle journalists desperate for royal wedding fodder. Yet according to Streets Alive, an organisation that encourages al fresco fetes, and several people I actually know, there will indeed be roadblocks and merriment.

Whether you'll be hanging bunting and hoisting furniture into the road; sitting round the kitchen table gossiping about The Dress and The Kiss; or (let's be honest here) sprawled on the sofa, basking in the glow of Kate's shiny hair, while your own remains unbrushed — there will be food involved.

For a party of one or of many, I suggest preparing a traditional British treat that's quick to make, simple to customise, smells of comfort, and enjoyable any time of day — the scone. Its pronunciation is fiercely contested (are you on team skon or team skoan?) and preferred recipe and cooking method hotly debated. You will find hundreds of theories of how to get the best height, the best texture, and when it comes to toppings, another war breaks out. Bloody scones. 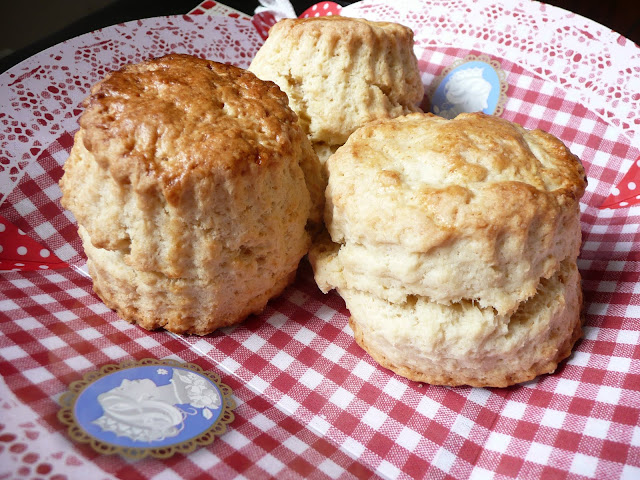 I turned to my trusty River Cottage Bread Handbook for guidance and was not disappointed. I love almost everything about this little book — the simple, stunning photos, the straightforward explanations that make sense and are easy to follow (a difficult feat in baking), and Daniel's appreciation for all things baked beams from every flour-dusted page. My only complaint is the book's size makes it nigh on impossible to keep open without perilously weighing down the corners. I could really use a good cookbook holder that suits books of all sizes — suggestions welcome!

Following are two of my favourite scone variations.

This recipe creates what some call cream scones or cream tea scones. They are light and crumbly but with a rich decadence backed by a warming hint of vanilla (I reduced the amount suggested as I found it a bit overpowering). He says this makes around eight; I'm boggled as to how he achieved that many.

Cut the butter into small cubes and put back in the fridge for just a few minutes. Preheat the oven to 200C/gas mark 6.

Beat the egg, then add in the vanilla and cream and beat together. Sift the flour, salt and baking powder into a mixing bowl. Then rub the butter in with your fingers until the mix resembles fine breadcrumbs. Stir in the sugar, and then add the cream mixture.

Flour your work surface. Bring a soft dough together quickly with your hands, turn it out on to the surface and knead for about 10 seconds, just to get it a little smoother — you don't want to mess around with this too much. Flour your hands and pat the dough out until it's around 3cm thick. 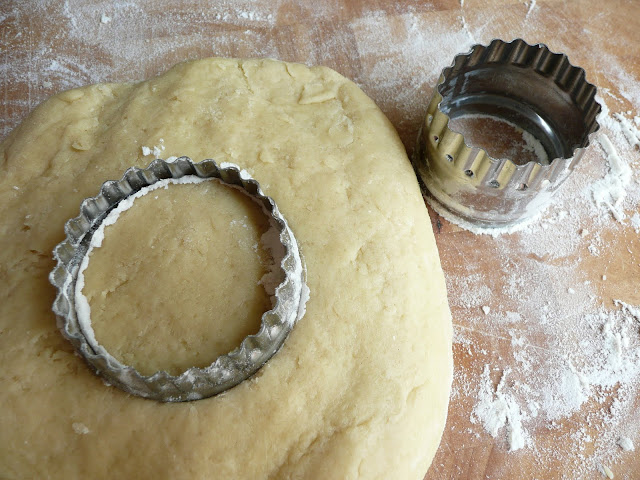 Dip a 6cm pastry cutter (you can make them thicker and wider depending on how monster you want your scones to be) into flour and press straight into the dough. Push the cutter straight down, and out, without twisting. This helps the scones rise straight up. You may need to gently nudge them out of the cutter.

Place the cut scones on to a lightly greased baking tray, and brush the tops with milk. Bake for about 15 minutes, then check if they are cooked in the middle by poking a toothpick through the center. It should come out clean, but if it has bits of batter on it, pop them back in for a few more minutes.

Let the scones cool for a couple of minutes on a rack. Admire and appreciate their differences, instead of fretting that one leans to the right, and one is darker than the others. Like snowflakes, no two scones look the same, but its their individualism that makes them an effective collective.

Serve scones while they are still warm (the smell will have gathered everyone around by now). How you top your scone in the UK is meant to show geographical allegiance. For example in Cornwall, jam goes on first, then cream. In Devon and Dorset they reverse the order. Traditional cream teas feature thick clotted cream. These scones are quite rich, so just some butter and jam will do nicely! 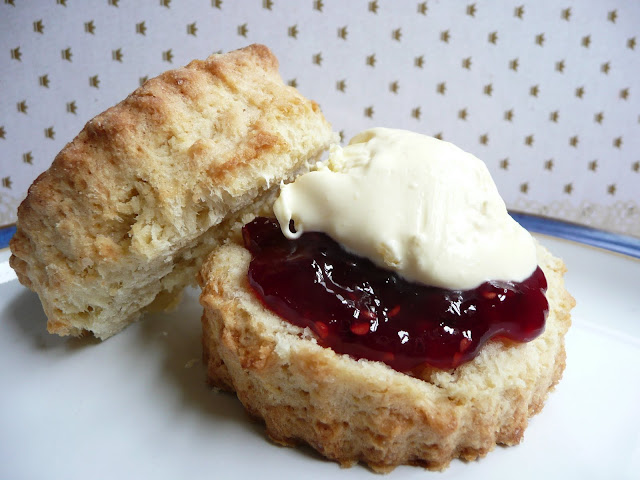 Love your Leftovers: Scones are best eaten warm, and fortunately for those getting up very early to watch the wedding, you can make them the day before. Once you've cut out your scones place them on a baking tray and put this in the freezer. Once they are frozen pop them into a bag and put it back in the freezer. When you're ready to bake, take out as many as you'd like to make and put them on a lightly greased baking tray, brush the tops with milk. Preheat the oven and then bake for about 20 - 25 minutes. Baked scones can be frozen as well, just make sure they've totally cooled off, then put them in an air tight container and place in freezer. On day you'd like to eat them, remove from freezer and let them defrost, then warm in the oven for about 10 minutes.

Scones are most often served with tea, but if you're tucking into some as part of a royal wedding tribute, put the tea pot away and wash them down with bubbly, daaahlink! English bubbly of course! 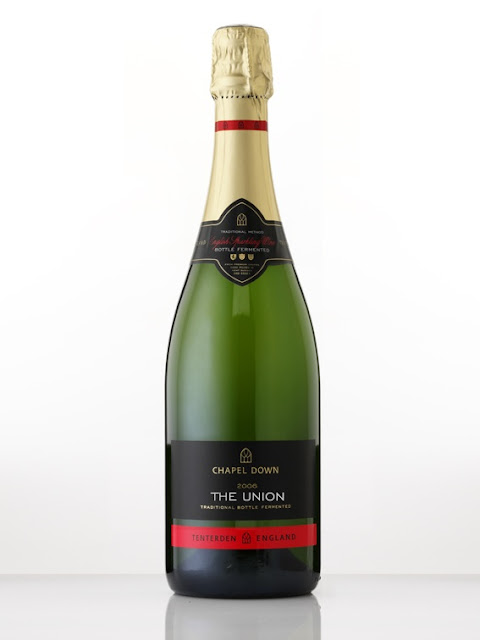 I'm a big fan of the winery Chapel Down, and they've produced a special edition sparkling wine called The Union, 'a marriage of two of the greatest sparkling wine grapes', perfect for toasting those two crazy kids. Cheers!

Follow instructions above, sifting the mustard powder and cayenne into the flour, and once you have a fine breadcrumb texture stir in all but a handful of the cheese. Beat the egg and milk together and combine with flour mix. 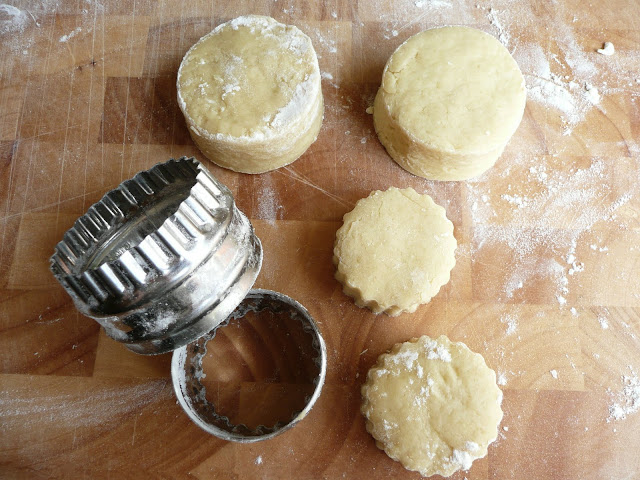 Try cutting scones into varying sizes, use the pleated and smooth sides of a pastry cutter if you have the option. Once you've brushed the cut scones with milk pile the remaining grated cheese on the tops, it goes toasty crusty brown. Mmm.

Allow me to stir up more tradition-busting British ire here by not only suggesting you resist the urge to put on the kettle when serving these scones, but that instead you mix up some Bloody Marys! The warm buttery cheesiness is washed down wonderfully with this classic spicy tomato cocktail. 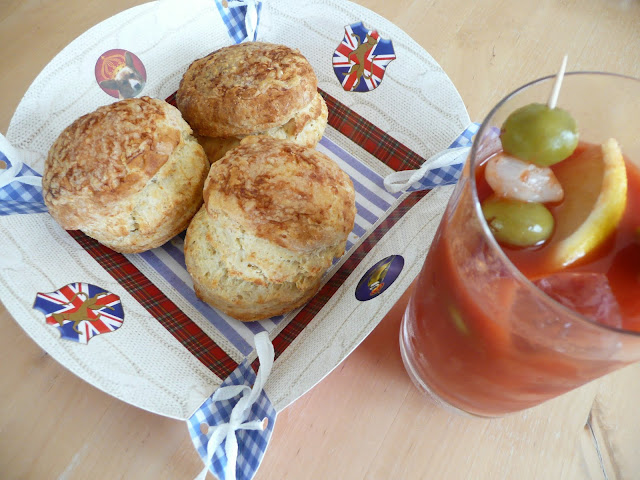